The chanupa ceremony was so rich and multi faceted that I think it'll take several posts to convey the extent of it all but to begin with; the 'GREETING and THANKS' prayer that was said was so beautiful, it's worth sharing:

GREETINGS and THANKS to each other as people😚

TO THE EARTH mother of all, greetings and thanks🌎🌍🌏🌐

the grains and greens, BEANS and BERRIES 🍒as one we send thanks to FOOD PLANTS🌾

MEDICINE HERBS of the world and their keepers, GREETINGS & THANKS🌱

TO ALL ANIMALS & their teachings, greetings and thanks🐶🐷

THE TREES for shelter and shade, fruit and beauty, greetings and thanks🌳

TO ALL BIRDS large and small, joyful greetings & thanks🐓

THE THUNDERERS our grandfathers in the sky. We hear your voices, GREETINGS & THANKS⛈

and now THE SUN for the light of a new day and all the fires of life, GREETINGS and THANKS🌞

AND THE STARS for their mystery, beauty and guidance GREETINGS & THANKS☆★

and for that which is forgotten

WE END OUR WORDS

NOW OUR MINDS ARE ONE💗

GREETINGS and THANKS to the natural world - daily thanksgiving by the Onondaga Nation, Haudenosaunee  https://www.syracuseculturalworkers.com

From The Tuam Home Survivors Network

Last Thursday night at the Sugar Club in Dublin 2, at the launch of her new album 'Unbroken Line' Ciara Sidine met with the Chairperson of our Tuam Home Survivor Network, Peter Mulryan and group member Michael O'Flaherty.

Both Peter and Michael, as you are know former residents of the Tuam Mother and Baby Home  where they spent their formative years.

The meeting with Ciara Sidine prior to the concert, was emotional both for Ciara and survivors, Peter and Michael, Ann (Michael’s wife) and Breeda (Group secretary) who also attended.

Ciara is a social justice advocate and uses her skills and talents of song-writing and singing to expose issues that affect all of us and which prevailing power structures seek to suppress. Ciara explained both in private to us and upon introducing the song ‘Finest Flower’ to her audience, that this song, came to her as she learned more about the mother and baby homes throughout Ireland and mothers who were ‘banished’ from their communities and incarcerated, in some cases for decades for , being unwed and pregnant, which was perceived by those holding power  as a ‘sin’.  She worried about ‘getting it right’.  The reality is, there is no right or wrong way to deliver a message that is truthful and heart-felt.  Certainly when combined with a genuine respect for the disempowered whose tale it relates, it can only be received in the same way  - via the heart.

I’m not ashamed to say Ciara’s song, when I first heard it, moved me to tears. I was taken by surprise hearing it first on radio and Ciara’s words at interview. Too often, those stories remain unmentioned and unmentionable. The lyrics and melody have a certain poignancy alone, but when combined with Ciara’s incredible skill to deliver, in hauntingly mesmerising tone there is no doubt that it causes us to STOP and reflect on a time of cruelty to our most vulnerable citizens.

That those women who found themselves with child, unwed, were treated in such a manner remains a dark stain on our recent history, one that can never be erased.  Nor would we want  it to be erased but rather EXPOSED for its true depth and impact amounting to  a denial of rights to mothers AND their children who were forced to negotiate a difficult life path.  The stigma seeping through every curve of that journey and impacting even more negatively year on year, every bump on that road, as  as true justice even today, appears equally elusive.  The adage   justice delayed is justice denied so apt denoting the many obstacles still experienced by the Magdalene women and the survivors of such Institutions.

We are grateful to Ciara for her dedication to Mothers and Children; Survivors of Mother and Baby Homes and for speaking on national airwaves in an attempt to maintain a focus.  Too many mothers and survivors  have already lost their battle for life in a quest for justice that remained unreachable for them.

Let us as advocates and those who have survived now include  particularly, those for whom the journey became unbearable and the forgotten; the little children of Tuam and all such Institutions of incarceration, their mothers living out their final years unable to voice traumas endured  or laying in mass graves in cemeteries either adjoining Magdalene Laundries or in certain localities where the Laundries operated.  Their children, their ‘finest flower’ pushing through a choking web of  thorns and weeds, and still – that ‘finest flower’  blossomed.  That such a ‘flower’ survived in toxic and suffocating conditions is testimony not alone to courage and determination of mothers and survivors but to the power of enduring love.

We remember them, who walk amongst us, in light and in shade and in the chambers and soils that envelope their human remains.  And even at our final breath, we will remember them.

With a special Thank You to Ciara Sidine. 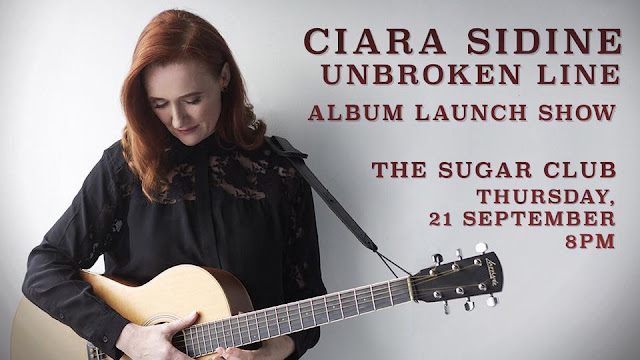 ‘Americana [with] an unmistakeably Celtic feel to its poetic lyrics and confident vocals.’ UNCUT

Posted by Sadie Cramer at 14:59 No comments: Links to this post