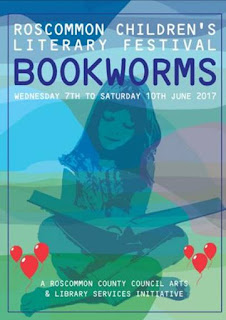 https://issuu.com/roscommonartscentre/docs/bookworms_festival_brochure_2017
Posted by Sadie Cramer at 09:38 No comments: Links to this post

Boston College Findings on Tuam Mother and Baby Home in 2012

Article in Irish Central by Frances Mulraney dated May 22

Boston College informed an Irish inquiry investigating the Tuam Mother and Baby home about concerns regarding the home’s worryingly high infant mortality rate a full two years before the death rate of the home’s children were ever revealed to the public, the Irish Examiner has reported.
On February 21, 2012, Professor Jim Smith of Boston College and the Justice for Magdalenes Research group sent information to the chairperson of the McAleese inquiry, Senator Martin McAleese, about the death rate in excess of 50 percent within the mother and baby home. This was two years before Tuam would become international headlines as the scandal of the infant mortality rates was revealed.
The McAleese inquiry was an inter-departmental committee established by the Irish government in 2011 to establish the facts of the Irish state's involvement with the Magdalene laundries. It was founded under a recommendation from the United Nations Committee Against Torture to investigate the claims that women sent to work in the Catholic laundries were exploited and tortured.
In 2013, the McAleese committee released its report which found there had been significant state collusion in the admission of some 11,000 Irish women into these institutions and Taoiseach Enda Kenny issued a formal state apology and outlined a compensation package for the victims two weeks after its publication.
The report, however, did not include any of the information provided by Boston College, as it was considered to be out of their remit in the Magdalen Laundries concentrated report.
“According to the returns submitted to the government, 12 of the 22 ‘illegitimate’ children from Co Mayo born at the Baby Home, Tuam, died within the year. Likewise, 25 of the 49 ‘illegitimate’ children from Co. Galway born at the Baby Home, Tuam, for the same period also died,” Prof Smith wrote in a letter to McAleese, highlighting a 1948 Government survey which recorded the number of deaths in these homes for the year ending March 31, 1947.
“This information reveals how dangerous an environment the Baby Home, Tuam could be for illegitimate children in residence,” he continued, emphasizing the infant mortality rates of 55% and 51% for children sent to the home from Mayo and Galway that year.
“Such disturbing statistics certainly begs the question as to whether these children would have been better off remaining in their mother’s care.”
The Irish Examiner has previously revealed that the Irish Health Service Executive (HSE) had concerns about the infant mortality rates in both Tuam and in another mother and baby home in Bessborough, Co. Cork, in the same year.
In 2012, a damning report by the Irish government’s Health Service Executive (HSE) found that the Irish Catholic mother and child home in Bessborough had a baby mortality rate of 68% in 1943. This report was not released to the public until it was sought under a Freedom of Information Act request by the Irish Examiner in 2015. Following this revelation, women were no longer sent to the home.
The report showed that in the 19 years between 1934 and 1953, Bessborough recorded 472 infant deaths, a figure taken from the Home’s own death register.
The register has now been released under Freedom of Information although the names of the children have been redacted.
It has been suggested that the high rate of infant mortality was caused by the falsification of death records to allow for children to be adopted domestically, and to couples abroad, without the knowledge of the Irish public.
These HSE reports were also not included in the 2014 McAleese report nor in the Report of the Inter-Departmental Group on Mother and Baby Homes, published by the Department of Children and Youth Affairs in July 2014.
When asked for comment on the claims that the McAleese inquiry knew of such reports before publishing their own finding, the Irish Department of Justice stated that the inquiry “no longer exists and is therefore not in a position to respond to specific queries”.

Link:
http://www.irishcentral.com/news/boston-college-knew-about-tuam-50-baby-death-rate-in-2012#.WSPz_hqXRWs.twitter
Posted by Sadie Cramer at 11:24 No comments: Links to this post

By Aoife Barry for The Journal


SURVIVORS OF THE Tuam mother and baby home, and people linked to the Tuam r
remains, are to meet with members of the Dáil in June.
The meeting follows this week’s announcement that Minister for Children and Youth Affairs Katherine Zappone is to seek expert advice from abroad on the possible exhumation and identification of the remains.
Catherine Corless, the historian whose research led to the discovery of the human remains in sewage chambers at the Tuam site, told TheJournal.ie that she is happy with how things are progressing.
But she said that the fact a new Taoiseach is due to be appointed makes her feel “a little bit uneasy”.
“They can’t drop this now no matter who gets in,” she said.

In advance of the 1 June meeting, Corless said they “are just all waiting and hoping” that what they have requested will come to pass.
“They are saying something urgent has to be done with the Tuam site – it just can’t be left as it is,” said Corless. “[Zappone] wants urgent action.”

Ministers Zappone and Simon Coveney had travelled to Tuam to meet with survivors of the home in March, as requested by Corless. “They spoke for nearly three hours,” said Corless. “She took nearly everything on board what they were looking for.”
“The main thing they wanted was an acknowledgement and an apology. As regards Tuam graveyard they wanted to know how many bodies they did actually find, and what’s going to be done – are they going to be left in the sewage area? Or are they going to be taken out, and if it is possible to take them out, is it possible to ID the remains.”
The survivors also want to know if a DNA database could be set up, so that “they might be able to find their own brother and sister”. Minister Zappone put the requests to Cabinet on Tuesday of this week.
“It seems none of the ministers disagreed with her,” said Corless.
Among the family members’ concerns are the state of the remains in Tuam, and how possible it is to identify them.
“If they are not all there I have said it: there needs to be further excavations,” said Corless.
“There is no point in just identifying half of the children. There are 796 missing. Are those adopted illegally are they in other chambers underground? They need to be accounted for. There are coffin burials, I know that from my research there are coffin burials under a playground put in the 80s.”
Corless has given the Commission of Inquiry into the Tuam babies case the maps of where the other chambers and cess pits on the site are. “I would be able to tell them more-or-less exactly where to dig,” said Corless.
She has also suggested that the Bon Secours sisters, who ran the Tuam home, should use some of their money to fund a DNA bank and the exhumation. She said this would be a “wonderful gesture” and could “maybe make up for the tragedy that went on in the 30s, 40s, and 50s in Tuam.”
“We know they are a multimillionaire company with the hospitals they have and wouldn’t it be a wonderful gesture as a statement of apology,” she said.
Corless said that she and the survivors have not had any contact with the Bon Secours sisters, despite her trying for the past number of years.
“I believed from the start they have the answers,” she said.
When Minister Zappone announced the discovery of human remains at the Tuam site, Corless told TheJournal.ie at the time that it felt like a vindication for her. Speaking this week, she said she was touched by the response she has received since from the local community.
“I really expected an uproar from the community on the Dublin Road housing estate [where the remains were found],” she said. But instead, the locals held an evening of remembrance for the babies buried there – and they presented Corless with a bunch of flowers at the event.
They also told her that “they never realised the playground was on top of other children and they were horrified by that. It was a lovely peaceful evening.”
She said the response has been “the most wonderful turn around really and truly. I’ve never come across any hostility from anybody.”
Right now, Corless is researching for the ‘home babies’, or those who lived at the home and survived.
“There are so many of them around,” she said. “And still more approaching me. It is just unreal, all those people have been in our vicinity for so many years and it’s only now you realise this is very alive, very much in the present.”
She has been contacted by people from the USA and England, as well as Ireland, looking for information on their families.
A statement from Zappone’s department this week said that the Tuam site “remains sealed and secured as it was at the time of the Commission’s announcement of the discovery of human remains”.

The Commission had removed a small sample of remains as part of its excavations to assist in confirming the nature of the discovery.

Her department said she is working with her Cabinet colleagues “to ensure decisions are taken on the future of the site as quickly, as effectively and as sensitively as possible”.

The Government wholeheartedly supports the steps being taken by Minister Zappone to secure expert technical advice both national and international so that decisions on the approach to be adopted are informed by international best practices in this highly specialised area.

The questions to be addressed include whether excavations should proceed and if identification of remains is possible.

Minister Zappone announced the publishing of the second interim report of the Commission of Investigation into Mother and Baby Homes this week.
It did not make findings that abuse occurred in mother and baby homes, but noted that its investigations are not yet complete.
She said that since the Commission announced the discovery of human remains at the Tuam location, she has “been working with Government colleagues to establish an inclusive process of engagement with former residents, their families and other stakeholders with a view to building a consensus on how the sensitive issues which arise can be addressed”.

It is essential that this process respects the memory and dignity of the deceased children who lived their short lives in this home. Galway County Council is the owner of the site and it will have a central role in progressing matters. I also understand that the Council has been liaising directly with the Commission and has written to the Coroner around these matters.

“I am anxious that decisions on the future of the site in Tuam are progressed as a matter of urgency and I hope to revert to Government very shortly with proposals,” said Zappone.
Article by Aoife Barry
http://www.thejournal.ie/tuam-catherine-corless-interview-3397122-May2017/
Posted by Sadie Cramer at 11:36 No comments: Links to this post