Sometimes an issue gets under your skin and it's impossible to shift it until it's addressed. This is my experience with the Tuam Babies scandal. It infiltrates my dreams and meditations constantly, it screams for my attention. I have to do something about it..‪#‎Tuamspiritbabies‬
Catherine Corless, the local historian and genealogist, who discovered the awful findings about the Bon Secours Mother and Baby home in Tuam in 2014 said this for IrishCentral.
"First I contacted the Bon Secours sisters at their headquarters in Cork and they replied they no longer had files or information about The Home because they had left Tuam in 1961 and had handed all their records over to the Western Health Board.”
Undaunted, Corless turned to The Western Health Board, who told her there was no general information on the daily running of the place.
“Eventually I had the idea to contact the registry office in Galway. I remembered a law was enacted in 1932 to register every death in the country. My contact said give me a few weeks and I’ll let you know.”
“A week later she got back to me and said do you really want all of these deaths? I said I do. She told me I would be charged for each record. Then she asked me did I realise the enormity of the numbers of deaths there?”
The registrar came back with a list of 796 children. “I could not believe it. I was dumbfounded and deeply upset,” says Corless. “There and then I said this isn’t right. There’s nothing on the ground there to mark the grave, there’s nothing to say it’s a massive children’s graveyard. It’s laid abandoned like that since it was closed in 1961.”
Because of Corless’ efforts we now know the names and fates of up to 796 forgotten infants and children who died, thanks to her discovery of their death records when researching The Home’s history.

I went to visit Catherine Corless last Tuesday (June 14th 2016) and I'll visit her again tomorrow (June 21st 2016) at her home in Tuam - more on this another time.
On Thursday June 16th I finally got to visit the site at Tuam with a friend (after two previous failed attempts) - it's quite tricky to find. Naturally, we both found it to be an eerie place; bang in the middle of a council estate with flocks of crows swooping back and forth constantly. The ground was undulating underfoot.

We both left with a lot more questions than answers:
1. Why has nothing happened to this site in the two years since the discovery?
2. We know there's a judicial inquiry, isn't that usually for the survivors of atrocities?
What about the deceased - what happens to them?
3. Before it's incarnation as a Mother and Baby home in 1925 and despite opposition from town people who wanted to see it used for industrial purposes, the building was previously a workhouse which was occupied by British military during the war of independence and later served as a barracks during the civil war. On April 11th 1923, six members of the Republican forces were executed after the raid on the Headford barracks. Mother Hortense McNamara (she who ran the home from 1925 until 1951) was instrumental in the erection of the plaque which stands aloof from everything else around it. This wall was part of the chapel that existed at one time.The importance of burial and memorial obviously did feature on her radar but it still leaves a lot of other questions unanswered.
Does the preservation of the site mean the actual place where the men were shot or the environs too? The plaque below is erected on a wall just outside the playground which is clearly inside the site in question but rises up awkwardly from the ground and is extremely oddly shaped.
4. Why won't the gardai treat this as a crime scene?
5. How do the people feel living in the houses surrounding it? What are their experiences?
6. What do the children using this playground think about it also being a possible burial site?
7. Why was the home really closed down?
8. What actually went on here?
9. Will the commission of investigation yield satisfactory results?
And so the list goes on but I'll leave them for another day. 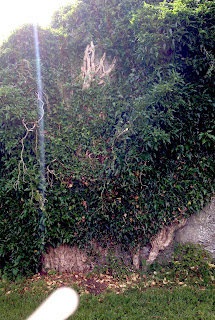 at June 20, 2016
Email ThisBlogThis!Share to TwitterShare to FacebookShare to Pinterest