by Katherine Brind'Amour, Benjamin Garcia
Mizuko Kuyo is a Japanese Buddhist ceremony that focuses on a deceased fetus or stillborn child. This ceremony was originally developed to honor Jizo, a god believed to be responsible for transporting dead fetuses or children to the other world. The practice has become more popular in the last half century due to the growing number of abortions taking place and the particular views that Japanese Buddhists have about fetuses and abortion. Japanese Buddhists believe that honoring Jizo will ensure that their aborted fetus successfully makes it to the other world, where it can be reborn in the future. In a religious context, Mizuko Kuyo provides an example of one of the many ways that fetuses are viewed and treated both in natural death and in abortion.
Literally, Mizuko Kuyo is the “water child memorial service” and the ceremony is deeply meaningful for those who practice it. Traditionally, the mizuko were buried underneath the parents’ house since it was believed that the natural water would wash the mizuko to the natural springs under the earth’s surface. It was believed that these springs were part of the beginning of life. The mizuko, or water child, is said to go from the water of the womb to its original liquid state upon its death. Water is important in Japanese Buddhism, as it represents both death and a faithful acknowledgment that the child will be reborn. Mizuko Kuyo is traditionally practiced on three main holidays. These are the spring equinox, the summer solstice, and a day referred to as “bon,” which is a summer day typically used to honor ancestors.
The mizuko are also celebrated at the Buddhist temples. At the temple the parents may buy a stone tomb and place a statue of Jizo on top of it. This statue usually has a red bib and Jizo is holding a stick with bells on top of it to help the mizuko walk. The stone also has the word “kaimyo” written on it, a traditional name given to someone after they pass away. Jizo statues may be placed in a park outside the temple. These parks are designed specifically for the mizuko and often contain swings, slides, and other playground equipment that children usually play on.
Although these tombs and playgrounds may seem like places to grieve, it is often exactly the opposite. In fact, they are quite happy places. Families of the aborted fetuses or deceased children come to these playgrounds to clean their statues and observe a moment of silence for their mizuko. They put seasonal clothing on Jizo and even set up umbrellas to cover them from the rain. While their other children play, the mothers, and sometimes the fathers, take a bow to honor their mizuko. They also bring toys and flowers and light candles to honor them.
Japanese Buddhism does not regard abortion as harshly as many religions and societies do. Abortion is becoming a common practice in Japan due to its cultural acceptance as a social necessity to protect family values. Mizuko Kuyo is practiced in order to prevent people from feeling that abortion is becoming trivialized and to provide the parents with a therapy for understanding their emotions and dealing with their loss.
by Katherine Brind'Amour, Benjamin Garcia 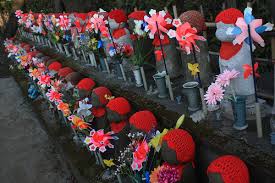