Vigil and memorial for Peter Tyrrell

With the results of Wednesday's 5th Interim report into the atrocities that took place in Mother and Baby Homes all over Ireland, this event is very timely. Peter Tyrell suffered horrific abuse in Letterfrack Industrial School and carried it with him until he ended his life on Hampstead Heath in 1967.
'One day I will go to Hampstead Heath...
I will stand for a long time;
Weep that it took so long for his match to spark a revolution.' Connie Roberts.
Please join us on Friday April 26th, gathering at Hampstead Heath @ 7pm. 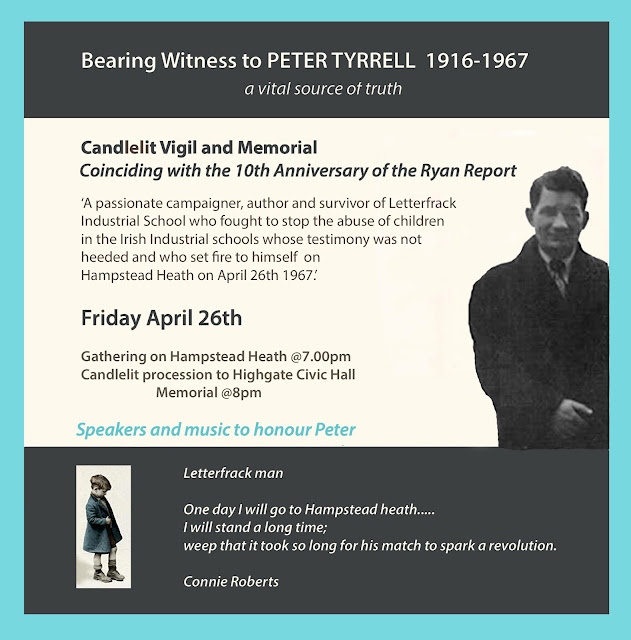 Posted by Sadie Cramer at 12:19 No comments: Links to this post 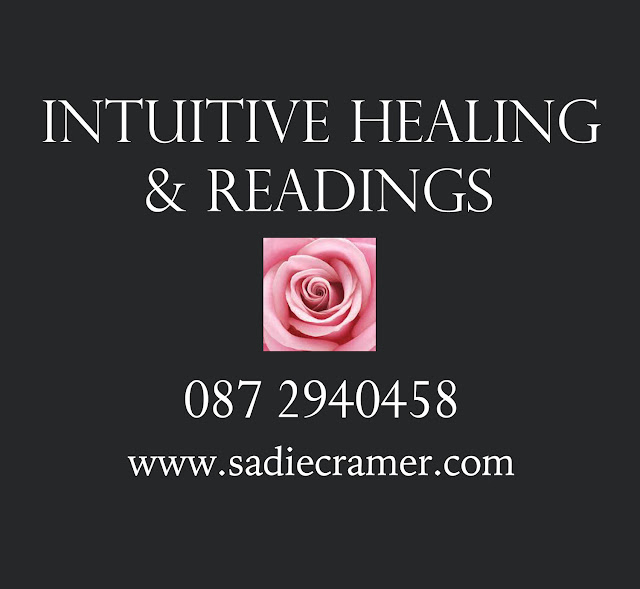 Posted by Sadie Cramer at 20:24 No comments: Links to this post

Posted by Sadie Cramer at 10:47 No comments: Links to this post

Commission of Investigation into Mother and Baby Homes:Fifth Interim Report

Statement by the Minister for Children and Youth Affairs, Dr Katherine Zappone TD

The Minister for Children and Youth Affairs, Dr Katherine Zappone TD, has today (17 April 2019) published the Fifth Interim Report from the Commission of Investigation into Mother and Baby Homes.
The Fifth Interim Report examines the burial arrangements in the institutions under investigation by the Commission. The report also examines the transfer of remains to educational institutions for the purpose of anatomical examination. Minister Zappone brought the report to Government yesterday (16 April 2019), securing approval for its publication. The report’s contents have been noted by Government and will be sent to the relevant agencies for further consideration.
Responding to the report the Minister said “This is a significant piece of work from the Commission that addresses important issues relating to the burial arrangements at these institutions. The Commission is collating a huge amount of material and examining the matters before it in a way never before possible. This report reflects the sheer depth and complexity of the work the Commission is undertaking. I know that that many former residents and their family members have been patiently awaiting this report and believe that it will assist in bringing clarity to this matter”.
The Commission has stated that it will include an analysis of the causes of deaths and the registration of deaths in its final report which is due by February 2020.
The Commission has submitted this interim report to assist Government in implementing its agreed course of action to manage the juvenile remains interred at the site at Tuam, Co Galway.  It is an interim report, compiled on the basis of information available at this time. It includes a series of detailed and complex technical reports which were sourced by the Commission from relevant experts to inform its investigations into the site of the former Home.
The report makes a number of findings in relation to the burials at Tuam. The Commission states that it is clear that many of the children who died in the Tuam Home are buried in the underground chambers. The report states that these chambers were not a recognised burial ground or purpose built burial chamber and that it did not provide for the dignified interment of human remains.
The Commission concludes that there is little basis for the theory that rather than having died, the children were ‘sold’ to America.
The report makes no specific recommendations but calls on anyone who may have information relating to the Tuam site to come forward and speak with them. On this point Minister Zappone stated “I would like to endorse this request by the Commission and would strongly encourage anyone with any information relating to the Commission’s terms of reference contact them immediately”.
The report also examines the burial practices in a number of other institutions including Bessborough, Bethany Home, Castlepollard and Sean Ross Abbey.  In the case of Bessborough, the Commission found no physical or documentary evidence of systematic burials within the grounds, but considers that it is highly likely that burials took place there. The Commission did not consider it feasible to excavate the full 60 acres involved, let alone the rest of the 200-acre estate on which the there has been extensive building work since the institution closed.
In Sean Ross Abbey there is a designated child burial ground in the grounds of the institution. The Commission has undertaken a geophysical study and subsequently a test excavation of the site and the results of this excavation are currently being examined. The Commission will report on this in their final report.
This report will take some time to fully absorb but undoubtedly advances our understanding of the burial practices at these institutions.
Minister Zappone stated that “The publication of this report is a significant milestone in the work of this Commission. I am once again reassured that the Commission will not shy away from asking the necessary questions without fear or favour and will shine a light on this dark period in our history”
ENDS//

Posted by Sadie Cramer at 09:54 No comments: Links to this post

Tuesday 16th April 2019
The Minister for Children and Youth Affairs, Dr. Katherine Zappone has announced a series of measures to respond to the Report of the Collaborative Forum for Former Residents of Mother and Baby Homes and Related Institutions, the recommendations of which are being published today.
Chief among the measures being announced is a commitment to develop an appropriate package of health and well-being measures which will be brought to Government for approval in September.  There will also be action on adoption legislation, a memorialisation programme and a research project on language and terminology.
In publishing the recommendations today, the Minister said:
"The Forum has successfully delivered on its initial Charter and mandate.  I am pleased to receive the comprehensive list of recommendations, and I intend to publish the full report after the Commission of Investigation completes its work, subject to any further advices of the Attorney General at that time. I have sent a copy of the full report to the Commission of Investigation."
The Government has committed to advancing consideration of the report and a comprehensive analysis of all of the Forum’s recommendations will now take place, to be completed by relevant Government Departments within two months. Minister Zappone said
"I am very pleased that the Minister for Health will develop proposals for a package of health and well-being supports, including access to appropriate health and social care measures. The Minister has agreed to set up a working group with officials from my Department to report back to Government by September, in time for the Estimates process leading to Budget 2020.
In my own area, I am proposing to amend key provisions of the Adoption (Information and Tracing) Bill to take account of issues raised by the Forum.  I am also developing a memorialisation programme and the commissioning of research on the use of language and terminology."
In order to meet the concerns expressed by the Forum, the Minister for Children and Youth Affairs has secured Government approval to amend provisions of the Adoption (Information and Tracing) Bill to provide for the greatest possible release of birth information to adopted persons and to other relevant persons, consistent with the legal and constitutional framework.   Amendments to the provisions of the Bill dealing with the privacy of birth parents are currently being drafted which will seek to remove the requirement for an undertaking to be signed by the person seeking their birth information.
The Minister also intends to bring forward amendments at Committee Stage in Seanad Éireann to provide a copy of the birth cert, where this is available on the files in State custody, to an applicant.
The Minister will develop a series of measures including the establishment of a scheme to fund permanent memorials in the locality of mother and baby institutions, provision of financial support to survivor-led groups for annual commemoration events, and a working group to develop a national memorial that commemorates, respects and honours mothers and children held in these Institutions.
A living memorial in digital, audio or visual presentation of information and individual narratives,
will be developed to serve to support the historic preservation of this long episode in our country‘s history.
Language and terminology is important, and the Forum recommended the establishment of an expert group which would help replace the often derogatory labels which stigmatised those affected.  The Minister will consult the Irish Research Council on how best to put together an appropriate research group for this purpose.
The Minister said:
"The Collaborative Forum emerged out of a recognised need to progress a number of key areas of concern for former residents.  This new and innovative approach to dialogue empowers former residents to contribute actively to Government deliberations and action on matters of concern to them and their families."
The Minister thanked the Forum for its work and congratulated the members for delivering its proposals in a timely manner.  She said:
"We now have the considered views of those most affected by our history in this area. I am committed to moving forward, and I believe we can make real progress with the initiatives I am announcing today."

ENDS
Note to Editors
The Collaborative Forum was established in 2018 to facilitate dialogue and action on issues of concern to former residents of Mother and Baby Homes.
Selection of members of the Forum was undertaken by an independent selection panel drawn from persons formerly in such Institutions, advocates and academics. The Forum consists of 19 representative members and a Chairperson.
The purpose of the Collaborative Forum is to build upon the process of engagement and consultation with former residents commenced through the facilitated meetings hosted by Minister Zappone in June and October 2017.
The Forum enables former residents to identify, discuss and prioritise the issues of concern to them.  It facilitates the active participation of former residents in recommending actions and solutions to address their concerns, including those issues raised in the reports of the facilitated meetings.
The recommendations reflect the output of the deliberations of the Forum and its subcommittees.
This Collaborative Forum is independent of and separate to any work being carried out by the Commission of Investigation into Mother and Baby Homes and certain related Matters.
The Commission of Investigation into Mother and Baby Homes and certain related Matters (www.mbhcoi.com) was established by Government in 2015 to provide a full account of what happened to women and children in these institutions during the period 1922 to 1998.
The Commission is due to report to the Minister for Children and Youth Affairs on 17th February 2020.
Link to Recommendations of the Collaborative Forum
Link to Collaborative Forum FAQs
Posted by Sadie Cramer at 14:03 No comments: Links to this post