Ten days into January and so far so good.

I'm not one for resolutions particularly but as I lead a fairly hectic lifestyle, decided a week before Christmas to look at where my energy was going and what might be taking up unnecessary amounts of time. Straight away social media popped up as something that needed to go, so I decided there and then to pull away from Facebook and Twitter.

Three weeks later and things have simplified, I have a lot more headspace, the creative juices are beginning to flow once more and the perceived lack of time is no longer an issue.

Snail mail, email and the phone never went away and believe it or not, people still use them. Happy Days.

Posted by Sadie Cramer at 10:19 No comments:

Tuam Home Survivors Network:
The members of the Tuam Home Survivors Network have given careful consideration to the Report of the Expert Technical Group Report on Options and Appropriate Courses of Action available to Government at the site of the former Mother and Baby Home, Tuam, Co. Galway, published by Minister for Children and Youth Affairs Katherine Zappone, T.D. on December 12th 2017.
It is the view of the members of the Network that the only appropriate actions to be taken are, and always have been as follows:
1.    A complete excavation of the Tuam site to ensure the the recovery of all human remains contained there.
2.    The relocation to an appropriate and secure location of all human remains recoverable at the site.
3.    Recovery and relocation to be undertaken with all the expertise and resources necessary to preserve as far as possible, the individual identity of each set of remains.
4.    Post-mortems to be conducted in respect of each set of remains.
5.    The taking and cataloging of the DNA from all remains to create the most complete database possible.
6.    An invitation to be extended to all those who have reasonable grounds to believe that members of their family may be buried at the Tuam site to provide their DNA.
7.    That invitation to be published widely including the UK and North America.
8.    The immediate convening of an Inquest by Coroner for North Galway or the appointment by the Attorney General of another coroner to open such Inquest.
9.    That such Inquest be convened without further delay, to inquire into the cause of death of each child, recorded by the Registrar General as having died in the Tuam home, for whom no burial place heen recorded, notwithstanding that it may have to adjourn until such time as progress has been made with the exhumation and identification of remains.
10.  None of the above to be undertaken by any person or body without the clear and unambiguous authority presently provided by Irish law.
It is the unambiguous position of the members Network that the bare requirements of law, statutory, constitutional and human rights, nationally and internationally recognised, cannot be met in any other way.
It is the view of the members of the Network, that the only useful discussion which could take place must be confined to the urgent implementation of what has to be done.
If the Minister wishes to contest the view of the Network, we request that she provide a comprehensive written response.
Peter Mulryan,
Chairperson,

Tuam Survivors Network.
Posted by Sadie Cramer at 10:16 No comments: 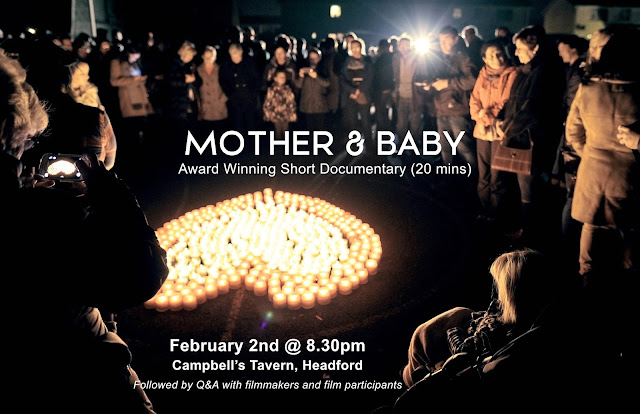 Through the generosity of Willi Campbell, Ger Hassett and Ishka films a special screening of Mother and Baby  Campbell's Tavern, Cloughanvover, Headford will take place on Friday February 2nd at 8.30pm.

This incredibly cathartic film highlights the lives of three survivors from the former Mother and Baby Home in Tuam.
Moving, cinematic and healing in content, this beautiful award-winning film will captivate you.

The evening will open with music followed by the film, and finish off with a 30 minute discussion.

All welcome to this free event

tuamhomesurvivors.com
Posted by Sadie Cramer at 10:05 No comments: