The Secrets of Smyllum - File on 4

At least 402 children have death certificates but no burial records in Smyllum Park, Orphanage, Lanark.
It seems that these children are buried in a mass grave at the former home.
How many more children died in orphanages/homes/industrial and schools?
Excellent Radio Four Documentary
Over many generations the Catholic church provided shelter and care for vulnerable children whose families had been broken by death or poverty. But many of those who grew up in these orphanages claim the care they offered amounted to years of serious beatings and emotional abuse which scarred them for life.
File on 4 investigates one such former institution, Smyllum Park in Lanark, uncovering new evidence of alleged abuse and raising serious questions about child deaths at the orphanage, before it was closed in 1981.
In Scotland, the ongoing child abuse inquiry has vowed to get to the bottom of what happened at Smyllum Park and other children's homes but it has been beset with delays, resignations and claims of political interference.
File on 4 asks whether the inquiry is digging deep enough to uncover the truth about what happened at Smyllum Park and why it has taken more than 50 years for the truth to come out.
Producer: Ben Robinson


http://www.bbc.co.uk/programmes/b0938tnj
Posted by Sadie Cramer at 12:52 No comments: Links to this post

Lorna Siggins
https://www.irishtimes.com/news/ireland/irish-news/ex-sisters-of-mercy-orphanage-to-become-creative-hub-1.3219316
Arts groups and politicians in Galway have given a mixed reaction to a decision by the Sisters of Mercy to hand a former orphanage and industrial school over to the city for use as a children’s “creative and cultural hub”.

The Sisters of Mercy building at Lenaboy Castle, acquired by the order in 1925, is to be transferred to Galway City Council ownership, along with a payment by the nuns of €750,000 for renovation and development.
The protected structure on Taylor’s Hill was run by the religious order as an orphanage, a children’s home and industrial school, and latterly a HSE West social care centre for children and adolescents, known as St Anne’s.
Council chief executive Brendan McGrath told city councillors early this week that a “heads of agreement” was being finalised with the order.
He said he had already been in preliminary talks with arts groups, including the Baboró international children’s festival, Branar Téatar do Pháistí and Galway Community Circus, to develop it as an arts centre and creative hub for children.

Former Galway mayor, Fine Gael councillor Pádraig Conneely, who welcomed the move, said he understood that EU funding of some €1.7 million may also be drawn down for the centre, which could be an integral part of Galway’s European city of culture in 2020.
However, Galway West Independent TD Catherine Connolly, who is also a former mayor, questioned whether survivors of the orphanage and industrial school had been consulted.
She also said it was “misleading” to state that the Sisters of Mercy were donating the property to the local authority, when the property had been identified as far back as 2009 as one of a series of properties to be handed over in part-compensation for the abuse suffered by so many children.
Ms Connolly said she was “very disappointed” that the verbal and written statements by Mr McGrath failed to recognise and acknowledge the sensitive history of the building, and the importance of consultation with survivors and families who had engaged in a “long and difficult campaign” for the building to be handed over.

Mr McGrath has described the acquisition as a “significant, positive development” which “advances Galway’s ambition as a sustainable, cultural force”.
Labour councillor Niall McNelis welcomed the acquisition, noting that “the sad history of this site will now be filled with children’s laughter, song and dance and will be full with dreams of colourful ideas”.
Baboró executive artistic director Aislinn Ó hEocha described it as a “very positive acknowledgement of the transformative power of the creative arts during a child’s formative years”.
Branar children’s theatre artistic director Marc MacLochlainn congratulated the city council and noted it was a “fantastic opportunity to create a space in Galway that will celebrate children and place them at the centre of the cultural life of the region”.
https://www.irishtimes.com/news/ireland/irish-news/ex-sisters-of-mercy-orphanage-to-become-creative-hub-1.3219316
Posted by Sadie Cramer at 12:27 No comments: Links to this post

City Hall had twice requested the Order hand over the lands to Galway City Council for the development of a public memorial park for the people of Galway but this has been categorically ruled out.

Instead of donating the 10-acre site to the city, the Order is planning to build a retirement village for around 40 sisters, a house to house Provincial Archives and a primary health care facility.

It has also decided to donate Lenaboy Castle (St Anne’s) – which along with the site were formerly home to the Lenaboy Industrial School – to the HSE, who are currently leasing the premises.

But Councillor Catherine Connolly, who has campaigned for the nuns to donate the land to the people of Galway as an apology for the hardship on those who had to live in the industrial school, says the decision to hand over the building to HSE is “cynical”.

http://connachttribune.ie/nuns-donation-of-lenaboy-castle-slammed-as-cynical/
Posted by Sadie Cramer at 13:26 No comments: Links to this post 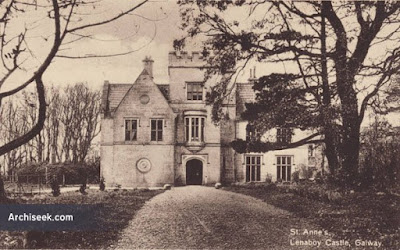 Galway Bay fm newsroom – The Sisters of Mercy are to donate a property in Salthill to the city council for use as a creative hub for children.
Lenaboy Castle which was a former orphanage is to be transferred to the ownership of the council along with a 750 thousand euro cash payment.

Over the past few years, the city council has been in discussion with the Sisters of Mercy, Western Province about the future use of Lenaboy Castle at Taylor’s Hill.
The building, on lands between Taylor’s Hill and Rosary Lane, had been used as an orphanage, a children’s home and a social care centre for children and adolescents under the name, ‘St. Anne’s’.
The cash payment of 750 thousand euro from the Sisters will be used to renovate and develop the property as a Children’s Creative Hub.
The city council says it wants the create the hub to support, nurture and encourage the creation of cultural and artistic work with, and for, children and young people.
Chief Executive of the city council, Brendan McGrath has had preliminary discussions with organisations such as Baboró, Branar, Téatar do Pháistí and Galway Community Circus.
He told Galway Bay fm news that it’s “a significant, positive development” and “advances Galway’s ambiti

on as a sustainable, cultural force,” that “recognises the place of children at the heart of our development as a city.”
The building will remain a protected structure and access will be via Rosary Lane.

http://connachttribune.ie/sisters-of-mercy-to-donate-salthill-property-as-childrens-creative-hub/
Posted by Sadie Cramer at 13:09 No comments: Links to this post

Posted by Sadie Cramer at 13:35 No comments: Links to this post