Our 20 yr.old car (we had it for 10.5 years) finally popped it's lil' pistons and took itself off to the great Toyota garage in the sky yesterday. We're all sad. We'll miss the 'fun bus'(it was an 8 seater) as it was affectionately called by some of our passengers. We live in the midst of the country (Mark has a van for his work) but we also need a car. How a new one is going to magically appear will be interesting, usually I get a bit worried by things like that but, strangely, I feel a sense of calm and trust about it and weirdly excited...? The car was towed away last Sunday and I've been at HOME a lot more than usual this week and for some reason the word HOME has come up in different forms to acknowledge. 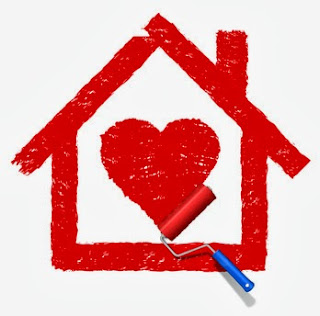 I like to look at the definitions of words (you've prob. guessed that by now.)
This is the psychological aspect of the HOME from Wikipedia.

A home is generally a place that is close to the heart of the owner, and can become a prized possession. It has been argued that psychologically "The strongest sense of home commonly coincides geographically with a dwelling. Usually the sense of home attenuates as one moves away from that point, but it does not do so in a fixed or regular way."[11] Since it can be said that humans are generally creatures of habit, the state of a person's home has been known to physiologically influence their behavior, emotions, and overall mental health.[12] People may become homesick when they leave their home over an extended period of time. Places like homes can trigger self-reflection, thoughts about who someone is or used to be or who they might become.[citation needed] These types of reflections also occur in places where there is a collective historical identity, such as Gettysburg or Ground Zero.[13]

Popular sayings include "a man's home is his castle", "there is no place like home", "home sweet home", "to be at home", "home away from home", "make yourself at home", "you can never go home again",[14] "home is where the heart is"[15] and "home is where you hang your hat".[16]
The word home can be used for various types of residential community institutions in which people can live, such as nursing, retirement homes for seniors, foster homes, etc.[citation needed]Short-term accommodation in a treatment facility for several weeks is unlikely to be considered 'home'.
Homes may be lost in many ways, such as natural disasters[17] or wars or abandoning for too long .

Heaven On Mother Earth
Could quite easily be
Hell On Mother Earth for some
By all accounts Home is not a word that most of the inhabitants would use to describe the place they endured, it was more a prison or detention centre.

The children from the Bon Secours Mother and Baby Home in Tuam were often called the 'Home Babies' or the 'Home children' by locals and a story that a lady told me one day in the Shopping mall kind of fits with the overall theme of this post.

She lived just beyond the great boundary wall of the 'Home,' her mother was a dressmaker and one day when she was around the age of five, a girl from the home appeared on the top of her kitchen table. The girl was being fitted for a new dress and was having her hem adjusted. This lady recalled how beautiful the girl looked in a brand new dress and despite having the blunt signature bob haircut that most of the girls had (to get rid of the lice) her platinum blonde hair shone with a brand new ribbon. Delighted for the girl she told her, "Now you look like a nice girl and not a 'home child' anymore." The lady told me that her own words have haunted her for years and that the passage of time has revealed so many things about that day in her house. Many children (girls especially) were prepared for adoption in such a manner. They were fitted with new garments, replacing the heavy brown uniform which was worn all the time, and given a colourful ribbon for the hair rather than the brown stripy one.

So much of this story is wrong but is yet another aspect to consider about the 'Home children.'#Tuamspiritbabies

Posted by Sadie Cramer at 09:10 No comments:

We briefly looked at the word recognition the other day.

We've named the project
'Tuam Spirit Babies - A National Art Project Recognising past wrongs,' but we only touched on what recognition is, who do we recognise during this process?

We know it's the mothers, babies and children who were so wrongly mistreated and incarcerated for years upon end.

We need to recognise the fathers whom from the outset never got a chance to be a daddy but also those who fathered children in an abusive way and sent their 'problems' away. Also the fathers of the women who willingly sent their daughters to these institutions.

There is a huge need to recognise that extortionate amounts of money was generated for the religious orders. Babies were stolen and traded.

We need to recognise that largely the general public were 'in the dark' about what went on in these institutions but had their suspicions.

We need to recognise that all levels of society were involved with the vaccination programmes and illegal adoptions in particular.

Recognition also needs to go those who have tirelessly worked in the background to bring these injustices into the public domain.


I've had the privilege of meeting Catherine several times now and have found her to be one of the most incredible people I've encountered for sometime. Not only did she painstakingly pursue the truth about the Tuam Mother and Baby Home but prior to her ever having been involved with such a big news story, through her work as a genealogist, Catherine has connected numerous people to their origins, bringing closure to the nightmare of not knowing. What a gift! #Tuamspiritbabies

Posted by Sadie Cramer at 10:17 No comments:

Please join us for an informal morning of craft, coffee and chat round our kitchen table to make white 'keepsakes' for our project 'Tuam Spirit Babies.' https://www.youtube.com/watch?v=se8FYIpFo_c (Tuam means burial mound and so represents all other burial mounds and buried truths.)

Keepsakes
These will be white (5"x5") and displayed at an exhibition space in Tuam on November 2nd 2016 (venue to be confirmed next week.) This ongoing project is to recognise those 800 mothers and small children who died during their time at the Bon Secours Mother and Baby Home in Tuam and whose bodies are still missing. It is also to recognise the survivors and for those who are still searching for loved ones.
I will have a certain amount of materials available here but please bring anything that might be useful (White material, wool, thread, sewing machines.etc..)

You don't need to be artistic, just come and have fun. Everyone's contribution is valid and necessary.

There's been a wonderful response to this project so far. Don't miss the opportunity to contribute and please bring a friend. Babies and children welcome Xx All welcome (there are many different people already involved and this project is very much about EVERYONE.)

Sadie
Posted by Sadie Cramer at 12:14 No comments:

There are many aspects to the word recognition as you will see below (Wiki) I think it's a worth while exercise not to spoon feed the answers but to see what arises from your own consciousness. More on this tomorrow.
recognition
rɛkəɡˈnɪʃ(ə)n/
noun
noun: recognition; plural noun: recognitions
Origin

Posted by Sadie Cramer at 09:06 No comments:

One of the reasons the project 'Tuam Spirit Babies' came about was to help bring healing to the dreadful period in Ireland's recent past. I don't have the answers as to how this can be achieved and neither do many of the people I've spoken to but we do have a willingness to explore the subject and take risks in order to do so. This leaves us in a state of vulnerability. We don't know, the outcome is uncertain but by talking to people and actively listening to their comments, we form connections. Connections are vitally important to the whole process of healing when we consider that so many families were torn apart; divided and isolated for generations. If what comes out of this project is reconnection, that is enough. It's very healing in itself. Many of the people we have spoken to talk of the need for public ritual, a coming together, a recognition as a collective, of past wrongs, a recognition of each other and our togetherness. This needs to happen and in itself, will nurture further connections.

For the past fortnight I've had chronic back pain and our car broke down, so I've been forced to stop and consider things. I ask my higher self questions.
Firstly, why I might find myself in such a situation; what external and internal factors have brought me to this position?

What does it really feel like to go into the space of vulnerability?
Who do I go to for help, who can I ultimately trust to help show me what needs to be addressed?

Why is asking for help so difficult for most of us/me?

What's the project mirroring in my personal life?

If my issue's alignment, what am I not aligned to? How can I change it?
What's the recurring theme when my back/car goes?
What else needs to be noticed to bring me back to full health?
Am I fully receptive to the help that might be offered?

In order to address these issues, I've had to ask for external help, I ask Spirit. I ask my husband Mark, who is a constant rock and a great source of support on every level. I trust him and love him and I know he will help me.
That feels good.
Then I go to Val McNamara whom I've also learnt to love and trust as a healer and a friend, who will gently help bring a shifting of perspective and restoration. I needed their help and they were more than willing to give it to me.

Working with so many different people, I also need time out for myself and sometimes, I just don't do enough or in time before something drastic happens.

Really, this post is about seeking healing when we need it, being prepared to feel vulnerable during the process but also entering into a space where we are asking and getting the heart connection with another, when we are prepared to let down the guard and receive it fully.

It's also worth remembering another's physical/emotional pain and often times the disconnection that happens from ourselves and those around us when we have difficulty in asking for help or wallow in the blame of it. This must have been an extra excruciating factor for the 'home mothers and children' but might also have been something experienced by the nuns. It's worth considering anyway.#Tuamspiritbabies
Posted by Sadie Cramer at 11:07 1 comment: