We didn't get to meet people at the shopping centre this week as the spot we had before was already taken by somebody else. (It doesn't mean we won't be back though-they're very nice at the Tuam shopping Mall and it's too good a spot to just let go ;-)
We (Val, Pauline and I) took an amble through the streets of Tuam and ended up at the 'Home Babies Burial Grounds' at the Dublin Road Housing Estate (the Old Bon Secours Mother and Baby home site.) This time we were greeted by flocks of swallows (it was crows the last time) acting exactly as their black feathered friends; swooping but not landing on the ground. Ironic to see swallows (the 'bird of freedom' in such numbers.) Lately, it's been a reminder of the freedom we experience in Ireland, in comparison to only a few decades ago when people were incarcerated for all sorts of reasons, although I wonder if those in direct provision or the homeless feel quite the same way? We spent some time at the grotto (more about this later) but the thing that kept going through my mind was not who or what's buried beneath but those who are left behind. It's a basic human right to visit the burial plot of a loved one. Something happens when we visit the grave of a relative (even if it's generations apart) and to be denied that basic right is inhuman. 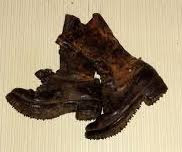 Just place yourself in the shoes of a survivor (hobnail boots announcing your arrival everywhere you go, if you happened to be a 'Home Child'.) In that context, imagine for a moment what it must have been like to see your friends disappearing around you on a daily basis - adopted or boarded out.
Imagine living an entire lifetime not knowing who your real parents were/are?
Who you are?
What must it be like to see the names of your siblings on a sheet of paper knowing they were labelled illegitimate and that they died starving? Or if their name's are missing...their whereabouts?

Can you imagine not having access to your own medical records?

Imagine being a young mother and wanting to keep your beautiful new baby but being cajoled or brutalised in order to have your child stolen and SOLD. Unthinkable. 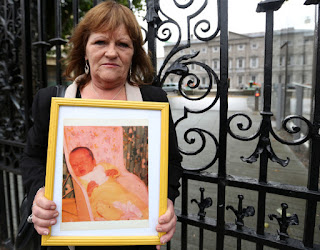 Terry Harrison with baby Niall who was forcibly adopted in 1973. Terry never saw her son again.

Imagine being incarcerated for years upon end, tortured daily or given the heavy physical duties of a man (often whilst heavily pregnant) and paid little or nothing for your efforts.

This all happened with the full cooperation of family members, the State and the Religious. They conspired to punish women for their 'moral mishap.'
As a result, those who have suffered, want and deserve recognition, a sense of justice and an apology in the form of monetary compensation for what they've endured. We've an expectation from the supposed 'powers that be' to do that for them. They owe this recognition to the survivors but it keeps not happening and we keep expecting that some day soon. In this process we give our power away, we do nothing whilst we wait and in the meantime people go to their graves with their stories untold.

We hope for justice but what if that never happens?
Katherine Zappone (Minister for Children and Youth affairs) announced recently that the aspect of adoption won't be included in the inquiry (this colossal minefield where possibly 36,000 babies were trafficked to the U.S) will not be investigated. No reason given, just that there will be no examination of illegal adoptions by the commission. (Too many were involved at different levels and a vast sum of money exchanged hands. Why would the State want to open this can of worms?)
End of story.
Or is it?

Perhaps it's the beginning of a new chapter but it's up to us to do something about it.

Posted by Sadie Cramer at 17:54 No comments: Links to this post